How can we help you today?

How do I delete old tax year information I no longer want to keep. (GDPR) Print

Use the following steps to remove the old tax year information that you require.

There are a few steps involve in this but it generally falls into 2 categories – Application Data and Documents.

To remove data from the live database you need to go to Admin>Purge Data (you will need the System Admin Role to gain access to the Admin section of the menu - see our guide on managing users and roles here). 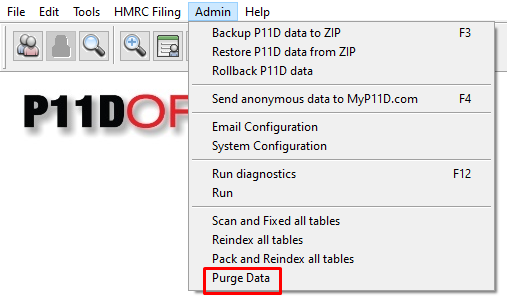 In the bottom left hand corner of the form you can set how many years beyond the current year you wish to purge. Sample of 5 years passed since 2017 allowing 2 years to be present for purging.

For each year you wish to remove select the corresponding year from the dropdown and click PURGE – you will be asked to confirm removal for that year.

Confirmation of the purging appears in the main central “Logfile” window.

This has removed the data from the live system. You now need to consider removing any trace of this data from other files - contained in documents, backup files etc.

There are a number of documents that are created during normal operation of the system. The main locations that the system uses are shown below (visible from root application folder) The Purge rountine deletes these residual files related to that tax year too - but you need to also consider that later backups also has this data in (see DataBackup Folder) and also where you may keep your own historical import and other report files away from the main application area.

Important - Each system generated backup takes a comprehensive set of all files from the data folder – including the ones you have just purged. So you will need to clear these files out otherwise this information could be resurrected.

Each tax year has it’s own discreet folder so it is easy to identify and confirm the removal of the year folders and it’s content. Again, like the import folder, each tax year has it’s own discreet folder so it is easy to identify and confirm the removal of the year folders and it’s content Don’t forget you need to also consider where you may keep your own historical import and other report files away from the main application area.

Did you find it helpful? Yes No

Send feedback
Sorry we couldn't be helpful. Help us improve this article with your feedback.